Dena Naomi Blackman, the Australian trailblazer who encouraged women to be self-sufficient and accept help in the home so that they may pursue their careers, passed away in Sydney on Tuesday 27 April surrounded by family after a long battle with ovarian cancer.

While Dena wished to be remembered for more than just her business, it was her business, DIAL-AN-ANGEL, that left an indelible mark on so many Australian lives.

Dena founded the business in March 1967. At the time she was a mother of three children under six years of age. The latest birth had been difficult, her then husband was busy running the family retail menswear business in Sydney's Pitt Street, and she was responsible for looking after her widowed mother and mother-in-law.

In her own words,

"I was struggling to keep my head above water."

While vacuuming, she had a premonition of having an Angel come and assist her in the home and with the children. She placed that dream on paper and, with her signature "chutzpah", convinced her bank manager to lend her the money to make it a reality, without the collateral of property, income or a job.

Dena's first investment was an advertisement in the North Shore Times on 15 March 1967 to recruit Angels. Within days, 22 clients had rung up requesting the help of those Angels once she found them.

The business took off, and incredibly, she went on to give birth to a fourth child 16 months later. As a start up entrepreneur, she cared for four children under the age of eight years.

"Keep your staff where they belong - at work!"

... and many employers went on to include "carer support" as part of their employee benefit programs.

On celebrating its 45th anniversary, the national award-winning business had ten offices across the country, three franchises, more than 10,000 contracted Angels, 1,500 staff Angels, and 80 office staff. By that time, it had assisted more than 40,000 families.

Daughter, DanieIle Robertson worked in the business for 28 years, and after 17 years as Chief Operations Officer and Financial Director, was appointed CEO in 2003 when Dena decided to retire stating,

“Only Prince Charles has had a longer apprenticeship than Danielle.”

In September 2014, the business was sold. Her alter ego, Danielle, went on to establish a successful niche business in the care sector, DR Care Solutions. 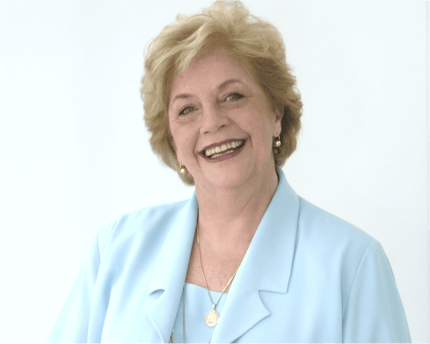 There were many other aspects to Dena life.

She was a Brisbane girl of modest background. Despite her parent's reticence, she doggedly pursued her interest in getting a good education.

She won a scholarship to Brisbane Girls Grammar and, in her final year, was elected Head Girl. On finishing school, she was awarded a Commonwealth Scholarship to pursue university studies.

While on a trip visiting family in Sydney, she attended a Sydney University Open Day and was offered a place to study medicine or law. Her parents were not enthused and decided she would study pharmacy.

On completing her studies and apprenticeship at the Dover Heights Pharmacy, she mailed her qualification to her parents and turned around to pursue a career in the commercial world at a new enterprise called, Radio Rentals.

When she married, as was expected at that time, she gave up her promising career there. And as a young mother she assisted her husband in the family business until she launched her own in 1967.

Throughout life, Dena held a great love of literature. Shakespeare, Kipling, Byron were among her favourites. It was a thrill to her that her first source of income was from winning poetry recitals at local eisteddfods from the age of eight.

Additionally, she wrote children’s books, developed a ‘hobby business’ called Cavorting Cork which decorated children’s coloured Zoot Cases (school bags), she taught speech and drama and used her creative energies to teach others to have a love of learning. She was inquisitive and wise.

From her love of literature she fashioned a philosophy that helped guide her through good and bad times, and she never lost the thrill of burying herself in a great book.

We remember Dena for her tremendous work ethic, extreme stamina and passion for life. She very rarely had a day off.

Cryptically, she titled her autobiography, "My Dress Rehearsal". It was inspired by the words of a much-loved employee, the late Phil Akins who said,

"This is my first time round, Dena. It's just a trial run. My next life will be the real thing."

It became Dena's credo, there was so much she still wanted to do, make and learn. This life was Dena's dress rehearsal.

May you, Dena, our Chief Angel, go on and achieve even more in your next life.

"A deep void has been left in my life. The matriarch of our family will be deeply, deeply missed. Rest In Peace my beautiful Maman! Fly high my beautiful Angel."- Danielle