The business was a family business with Danielle working alongside Dena from 1986 and becoming Dena's successor on her retirement in August 2003. Danielle's eldest sister, Nadine, ran DIAL-AN-ANGEL's Brisbane operations for 20 years and her second sister, Nicki, was involved in the business in the mid-1980s.

It was evident early on that Danielle and Dena were in sync with each other and the business' goals, with both sharing a passion for caring for Australians.

DIAL-AN-ANGEL was sold in September 2014. In the following years, the Australian Government introduced wide-ranging changes to the provision of care, introducing Consumer Directed Care (My Aged Care) and the National Disability Insurance Scheme (NDIS). Danielle saw a service gap in this new world of care and she set about bridging it. DR Care Solutions was born. 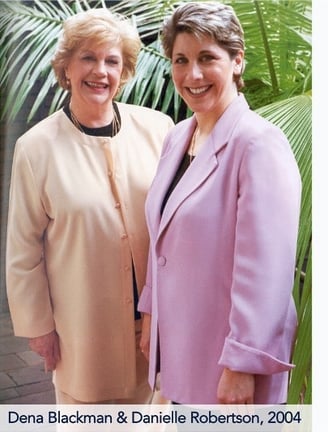 DIAL-AN-ANGEL was a professionally-run, privately owned, non-government subsidised or funded group of companies, and Australia's only National Group specialising in home and family care. It provided care for Australians from 1967 until 2015.

DIAL-AN-ANGEL was a 'one-stop shop' offering a comprehensive range of in-home support services through placing emergency, temporary, regular and long-term workers and carers (we called them "Angels") with clients in their private residences. The services could be booked by telephone, email or facsimile. The requests received were many and varied. The business thrived on the most challenging of requests and encouraged feedback long before Google reviews!

How Did We Do It?

Promptly and professionally! A DIAL-AN-ANGEL Coordinator ensured that each Angel's talents, capabilities and interests were respected. Coordinators were trained to assess a prospective Angel's applicant's experience, qualifications and potential. From here, they learnt the Angel's strengths and matched them to a client's specific requirements.

Where Could We Be Found?

Clients do not put their most treasured assets - their family and homes - 'at risk'. DIAL-AN-ANGEL was a reputable and long-established agency. They knew our Angels were carefully screened and selected for their suitability prior to any details being divulged about any client's needs. Prior to placement, all Angel applicants were interviewed personally with full security checks undertaken. Client privacy and confidentially were faithfully preserved.

The History Behind The Halo 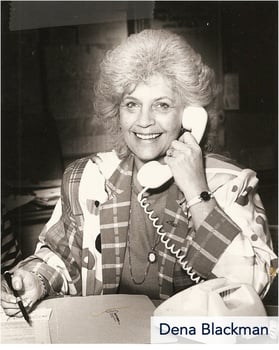 I guess you would call it a defining moment. The 15th of March 1967 not only marked the birth of DIAL-AN-ANGEL, it also marked the arrival of a female CEO bursting into a male dominated business world. That woman was my mother, Dena Blackman. The other thing that made my mother unique at the time was the fact she was running a business in addition to a busy household with four children under eight years old. One thing that never changed through the years was that Dena broke down stereotypes, pushed through barriers, and always led by example.

Dena was an amazing woman with great stamina and passion for life, her family, and her business. She was a wonderfully protective mother and was always there for me both personally and professionally. As an adult, I understand the reasons behind her absolute protectiveness of her children, and with age, I am able to appreciate that fact. 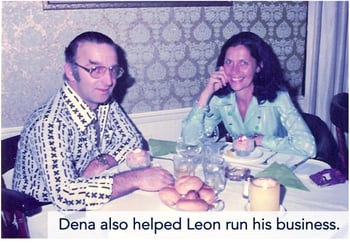 As busy as she was with running DIAL-AN-ANGEL, helping Dad out with his retail fashion business, writing children's stories about a "Cavorting Cork" and manufacturing children's school cases ("Zootcases"), Dena organised a very busy household running us around to all our different activities. It's amazing that we never went without anything and had a very comfortable childhood with plenty of family and friends in our lives.

I spent many of the school holidays, as well as before and after school time, at the offices of DIAL-AN-ANGEL, and I was the kid who advised Mum I would never enter the family business! Best laid plans...

In business, although her leadership style was somewhat authoritarian, it is the way leadership was undertaken in Dena's generation. She saw things as either 'black' or 'white'; there was no grey with Dena and fortunately that business intuition has been more right than wrong throughout the years. She was always ahead of her time.

I'm very mindful about what I say about Dena, particularly as we are similar in so many ways. Ours was a simpatico relationship that I believe is quite rare.

In addition to being my amazing mother, Dena was my mentor, my confidante, my friend, and my sounding board, and I have been truly blessed being born to such wonderful parents.

So what were the 'Mistakes, Myths & Miracles' that surrounded Dena? There were so many stories that attest to them, Dena even wrote a book about them, "My Dress Rehearsal". You'll be forgiven to think it's an autobiography of five different people, not just one. In the book, Dena opened her heart, laying bare all her challenges, pains and privileges so that we could experience her amazing journey and learn from it. I think many of us strive to be like her. But there was - and will only ever be - one Dena.

For thousands of Australian families, DIAL-AN-ANGEL became a 'lifeline' in their crusade against daily domestic problems and household emergencies.

Exhausted and ill after the birth of her third child (Danielle), Dena envisaged the heavenly prospect of being able to 'dial' an angel - an extra pair of hands to help with the mounting housework, ironing and the care of three lively pre-schoolers. 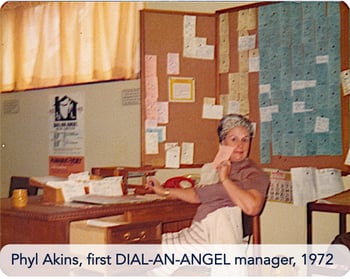 No private agency existed at that time. Even the government home help service, 'Emergency Housekeepers', had a nine-month waiting list! Dena decided that it was imperative for 'someone' to do something about it - and so she did. DIAL-AN-ANGEL was established on 15 March 1967.

Phyllis ('Phyl') Akins helped establish the first DIAL-AN-ANGEL office in Lindfield, Sydney, and she worked for Dena for the following 15 years. The initial advertisement for prospective Angels attracted a gratifying response from wonderful applicants, as well as 22 prospective clients who had seen the advertisement and were prepared to wait for the first candidates to be screened and selected! Dena realised she had truly tapped a market. Australians were in desperate need of quality home help.

The Foundations Were Laid & A Business Journey Followed

Once the fledgling DIAL-AN-ANGEL office was established in 1967, the business took on a life of its own: 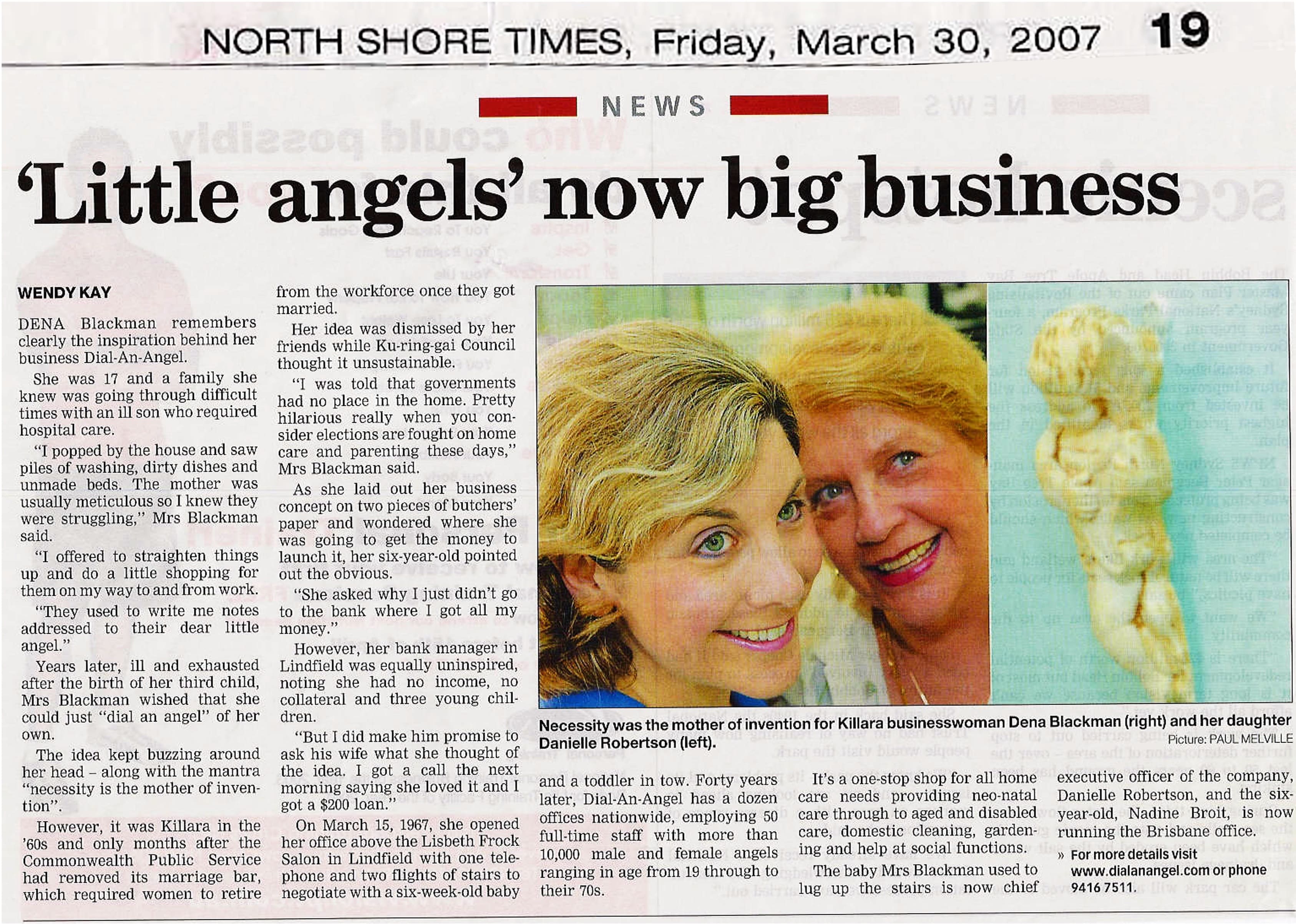 A Household Name - A Family Business

DIAL-AN-ANGEL has been a real 'family affair', with three generations involved over the years since its inception.

Dena's mother, Freda, ran the Domestic Department for Sydney's Northern and Western Suburbs for almost 12 years, then handed over the reins to her granddaughter, Nadine, who continued in the role until her marriage and relocation to Brisbane. After the birth of her second child, Nadine returned to the fold and held the Brisbane franchise. In 2007, her daughter, Alysha, completed her Childcare Certificate and worked in the Brisbane office as the Childcare Coordinator.

Dena's second daughter, Nicki, worked with her mother for two years, setting up the first software accounting systems. Nicki then left the business on having her own three children. 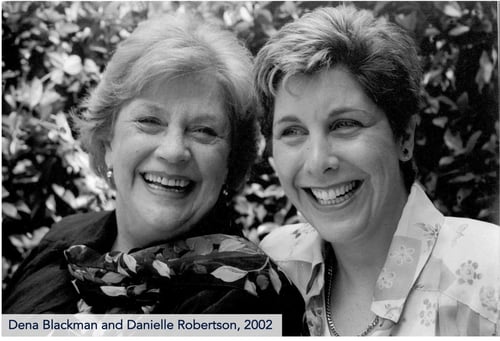 Dena's third daughter, Danielle (the baby whose birth started it all!), worked alongside Dena from August 1986. Danielle's contribution to the smooth functioning of the DIAL-AN-ANGEL Group of Companies over the following 17 years was recognised in August 2003 when she was appointed Chief Executive Officer of DIAL-AN-ANGEL Pty Limited. The future direction of the company was in her hands.

The 12-hour working day habit that Dena modelled and Danielle adopted was extremely hard to break. Danielle spent long hours in the office. A major achievement was the updating of quality assurance measures across the business, including comprehensive corporate policies and procedures manuals.

Dena continued on as Chairman of the Board of Directors and Senior Consultant to the Group of Companies which came under the umbrella of Angels & Associates Pty Limited.

In addition to her CEO role, Danielle also headed the Medico-Legal Department and took on the Expert Witness work formerly performed by Dena. It involved writing expert reports on the financial cost of care of people with gross physical and cognitive injuries acquired as a result of negligence or accident. These reports were provided to the Courts.

Because of Dena's many years of experience in arranging care for clients with a disability, she and Danielle were regularly called upon to give evidence as Expert Witnesses. Sometimes they would travel to country centres and interstate to give evidence in the Courts. Dena had been doing this since 1972. Danielle worked very closely with Dena on this advice work today.

Dena abhorred the idea of paid carers, her Angels, being a down-trodden class of workers. She always believed that a vital ingredient in the success of the organisation was the way the Angel regarded their work. Being an Angel was a vocation. It was valuable work delivering essential dignity to the client. Angels were always expected to give and receive from their clients respect and consideration. High standards in conditions and remuneration were in place. Unreasonable client requests and unfair work practices were actively discouraged by DIAL-AN-ANGEL.

continued to be one of her criteria for the selection of Angels. Angels employed as home makers and/or as carers were usually mature-aged, but some of the most enthusiastic and capable were the university students, the teachers and the student nurses who returned to the agency each vacation. Some top Angels from years past even became clients, and some of the early clients even became Angels!

Angels could be relied upon to cope with all types of situations: mothers who were unwell and trying to cope with a new baby; pregnant women facing miscarriages and unable to lift other toddlers at home; working mothers as well as sole parents; clients with substantial physical disabilities and/or incapacities and those suffering from Alzheimers and other types of dementia. Most of the calls taken were to help with the children, but from the mid-1980s, there were more and more calls for in-home care and assistance for the aged, the frail, and 'early discharge' hospital patients.

Reflecting the shortage of hospital and nursing home beds, the demand for in-home assistance rapidly escalated. Rather than undergo the trauma of relocating into a nursing home or retirement village, most elderly people preferred (and still prefer) to stay in their own homes with their precious memories around them. While some of the Angels were not qualified nurses, many of them had the experience and skills to provide practical assistance and personal care for convalescents, the frail and the disabled. It was not always simple to find just the right person - with the relevant background, experience, dedication, temperament and the sense of commitment - sought by DIAL-AN-ANGEL for the care situation.

"Although our name may suggest 'our heads were in the clouds', our 'feet were very much on the ground'."
- Dena Blackman

Our office staff were prompt, efficient and attentive. We took time together to celebrate our Angels, our office staff, and our joy of helping others.

What Were We Looking For When Recruiting Angels?

Some of DIAL-AN-ANGEL's First Advertisements for Angels 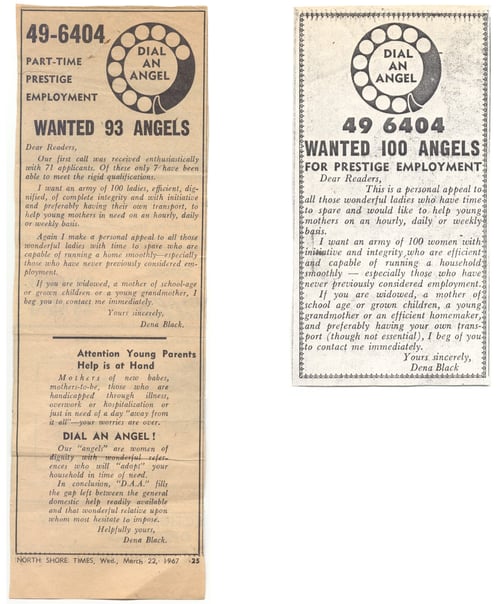 After almost 29 years in the family business - 17 years working in the business and 12 years as CEO - Danielle transitioned the running of the business across to its new owner, Nextt Health, in September 2014.

After navigating DIAL-AN-ANGEL through accreditation for Consumer Directed Care (CDC) and the NDIS, Danielle gained a broad and comprehensive understanding of the care sector and the relevant, and often complicated, Government legislation associated with it.

Having worked for the largest provider of in-home care services in Australia, she has significant hands-on experience managing the day-to-day operations of a quality care service provider, as well as conducting strategic board level negotiations.

Navigating the aged care system to obtain the right care solutions and outcomes for the client is Danielle's main driver.